The Illinois Agricultural Leadership Foundation (IALF) is proud of its 36-year history of developing knowledgeable and effective leaders to become policy and decision makers for the agricultural industry. 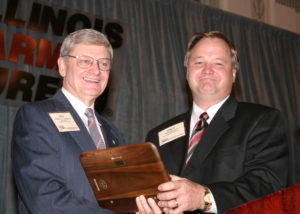 As past presidents of the Illinois Farm Bureau (IFB), Ron Warfield and Philip Nelson have left a lasting contribution to agriculture. Ron Warfield served as IFB President from 1993 to 2003 and was followed by his fellow IALP classmate Philip Nelson, who led the organization from 2003 to 2013.

“As I went through the program, it jump started my leadership abilities and exposed me to other components of the agriculture industry,” said Philip Nelson. “During my tenure as IFB President, we looked to the IALP as a resource to fill the IFB’s leadership needs and enhance our team.”

Ron Warfield also expressed his experience. “The IALP expanded my understanding of the size, scope, and complexity of the Food and Agricultural Industry and the need to engage, advocate, network, and communicate with all aspects of that industry. It encouraged me to promote, advocate, and embrace change for a very dynamic and essential undertaking.  It also challenged us to strive to serve and to accomplish all of these objectives to improve the world.” said Warfield.

Both of these IALP graduates provided not only leadership but action to better the industry during their IFB tenure. Philip Nelson initiated the highly successful Illinois Farm Family Campaign to better educate consumers about agriculture, while Ron Warfield worked to energize and organize the Illinois Ag Roundtable, uniting Illinois agriculture as one voice on shared issues and objectives.

Their leadership contributions continued following their service as IFB president. Philip went on to serve as the Director of the Illinois Department of Agriculture and also received the IALF Torch of Leadership Award in 2016. Ron continues to advocate for agriculture education, traveling throughout the world. He also stays involved close to home, working with his wife Melanie to help establish the Gibson Area Food Pantry in his hometown of Gibson City. Ron also served on the IALF Board of Directors until 2016.

Both Ron Warfield and Philip Nelson are examples of the knowledgeable and effective leaders the IALF strives to produce with every IALP graduating class. We thank them for their continued service to agriculture.