The Illinois Agricultural Leadership Program (IALP) Class of 2016 participants completed two weeks of study in Japan and Panama during the International Study Seminar in late February and early March.  The 13-day seminar included 16 sessions that focused on supply chain, logistics and trade partnership issues with these two diverse nations.  More than 30 speakers gave presentations to the group during the two weeks.

The class began the seminar in Tokyo with a briefing by United States Embassy officials, including Minister-Counselor of Agriculture David Miller and Agricultural Attaché Evan Mangino. Presentations were also given by the major commodity organizations representing U.S. farm sectors: the U.S. Grains Council, the U.S. Soybean Export Council and the U.S. Meat Export Federation. Class members toured a supermarket in Tokyo where U.S. beef and pork products were being featured and sampled by customers. Japan is the largest importer of U.S. corn and third largest importer of U.S. soybeans. 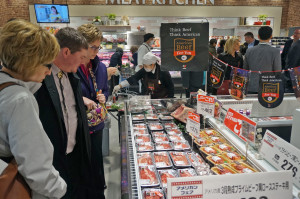 Members of the Illinois Agricultural Leadership Program Class of 2016 toured a grocery store in Tokyo that featured American beef and pork.

The Class of 2016 toured a Wagyu beef farm where cattle are raised with a higher fat content to produce the much-desired Japanese beef. The veterinarian who operates the beef farm also owns a small dairy operation, which also was visited by the class. The totally automated milking machines and computer-driven data collection system monitor feeding and productivity for each animal.

Clad in bio-security protective clothing, members of the IALP Class of 2016 visit a Wagyu beef farm near Tokyo.

The Port of Kashima is being prepared to handle the super-Panamax ships that will traverse the new lane of the Panama Canal. While at the port, class members toured the Nisshin OilliO company, where grain arrives, is processed and packaged into a variety of food products sold throughout Japan. The group also toured a tofu processing plant that utilizes U.S. soybeans in its products.

Hiroaki Kojima, Director, Japanese Ministry of Agriculture, Forestry and Fisheries, discussed Japan’s interest in the Trans Pacific Partnership and some of the challenges facing Japan’s agricultural sector. He noted that Japan has a shrinking population, estimated to fall from 127 million people to about 85 million by 2060. The average age of a farmer is 65, and the nation is having difficulties getting younger people into the farming business because of the low wages and hard physical work. More than one-million acres of Japanese farm land is fallow. Sixty-one percent of the nation’s food is imported.

Many of the crops grown in Japan are specialty crops. The Class of 2016 traveled to a strawberry farm and tasted the Sky Berry, a new, sweet strawberry grown exclusively on the farm. In addition, the group visited a tomato farm, an egg processing facility and a rural farmer’s market.

In Panama, the Class of 2016 viewed the new lane of the Panama Canal being filled with water. The lane is scheduled to be in use by June 2016, and is longer and wider than the original two lanes to accommodate super-Panamax ships. These ships have the potential to reduce the cost of sending U.S. agricultural products to Asia. However, it was noted in a briefing by the Panama Canal Authority that few ports in the United States have the 50-foot draft required for the larger ships. 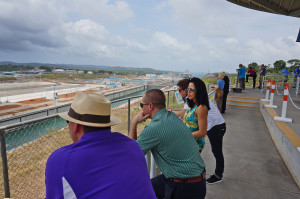 The new lane of the Panama Canal (at left) fills with water as members of the IALP Class of 2016 look on. This is the Gatun Lock at the north end of the canal.

The Class of 2016 was greeted by Manuel Grimaldo, Vice Minister of Commerce in Panama, and several representatives of the Ministry of Agriculture. It was noted that the most important mission of the Ministry is to educate the Panamanian people about agriculture. The class toured a grain processing plant where dried distiller grains (DDGs) from the U.S. are used in feed for chickens. Panama consumers eat more chicken per capita than any other Latin American country. Briefings were also conducted at the U.S. Embassy in Panama.

Also while in Panama, the class toured a vertical hydroponic farm that grows lettuce at half the price of traditional lettuce sold in Panama City, and a horse breeding farm. The visit ended with a briefing at the City of Knowledge, a sprawling campus in the canal zone formerly occupied by the U.S. military that has been converted to a business accelerator.