by Gary Baise, IALF Board Member

Vietnam experts see it becoming a much larger trading partner with the U.S.

For the past two weeks I have seen a much different agriculture in Southeast Asia. From experts such as J.P.Morgan’s agricultural advisor in Hong Kong to the U.S. Embassy, and USDA’s, I saw and heard the great opportunities for all of us in U.S. agriculture.

One theme which did surprise me is that China’s saber rattling regarding a potential tariff on soybeans is just that…saber rattling. Expert after expert had the common view that China would not impose a tariff. The experts had numerous reasons for reaching this conclusion. These views were expressed to members of the Illinois Agricultural Leadership Foundation class with whom I traveled to Hong Kong, Vietnam and Taiwan. 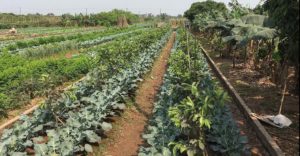 On average, Vietnamese farms average three-quarters of an acre, smaller than many U.S. backyards.

From the musty cells of the Hanoi Hilton to the flat lands surrounding Saigon, the trip was an eye opener as to how U.S. agriculture is respected, admired and relied on for both quality and quantity. The demand for U.S. products in Hong Kong and Taiwan was no surprise. Vietnam was another story.

My preconceived notion was that our time in Hanoi would be stressful and frankly ugly. I was 180 degrees wrong. From the tour guides, bus drivers, and people in coffee shops and restaurants there could be no more positive reception. Instead of seeking to distance themselves from the United States, there was and is a recurring theme of wanting to become closely allied with the United States and its agricultural prowess. Instead of a drab Communist city, I found a prosperous, skyscraper-filled, well organized city which we were told had been there over 1,000 years. Motor scooters with well dressed people were everywhere.

USDA personnel from the Foreign Agricultural Service (FAS) provided a positive view for future agricultural products coming from the U.S. to Vietnam. Vietnam is a nation with approximately 96 million people with an average age of 30. These 30-year-olds have a strong belief that products from the U.S., Canada and Australia are very safe.To reinforce this belief, USDA is opening a new APHIS office in Vietnam for the first time. With 96 million people Vietnam is able to produce 2 rice crops and 1 wheat crop annually. What little corn Vietnam produces, it is decades behind the U.S. because the corn harvesting is still done by shucking and drying and laying the kernels along the road edges. The average farm size of .74 acres  will  not support  an American tractor.

Almost 48 million people participate in the nation’s workforce and approximately 25 million work in agricultural and fisheries sectors. Agricultural production still accounts for 70% of the income for the population. Vietnam seeks to reduce its agricultural labor force to under 40% of the population.

Their key exports are fish, timber, cashews, coffee, and rice.

One surprise is that Coffee exports are approximately $3.2 billion and ranks second after Brazil. Vietnam is the largest market for U.S.-grown cotton. The good news for Midwestern farmers is we were told soybean meal exports doubled from 2011-2017. In 2017, Vietnam was our 11th largest agricultural export market!

One factory we visited – C.P. Hanoi – processes 60,000 birds a day using 70 farms for production of birds. This factory provides the product to KFC. One item caught all our attention when we saw that breast meat was being ground for use in a sausage which is an enormously popular item on the Vietnam breakfast table. For general consumption they prefer dark meat.

To feed its chicken and its 40 million head of hogs, Vietnam imports 70% of its corn and soybeans.

C P Vietnam has a very high quality operation and, like the U.S., wants to concentrate its production and have larger, more productive farms. The company also sees itself in the chicken export market.

The return of DDGs from the U.S. being imported into Vietnam was stressed.

The U.S. Grains Council has impressive people working with local processors using corn. Along with USDA personnel, agriculture is well represented by these dedicated people. Vietnam experts see it becoming a much larger trading partner with the U.S. Good days are ahead for agriculture with Vietnam and indeed a “Good Morning.”

The opinions of the author are not necessarily those of Farm Futures or Farm Progress.