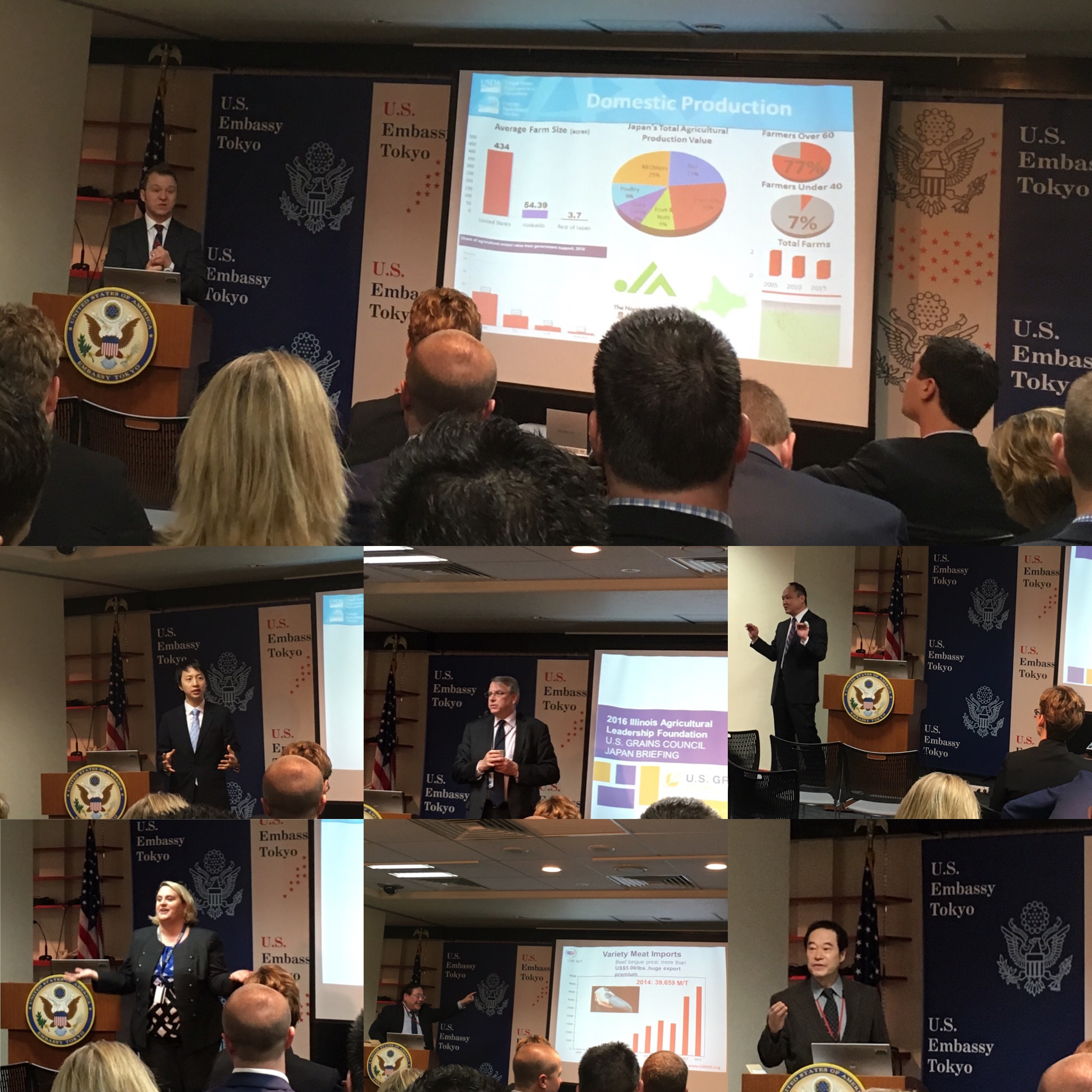 It is a nice cool day in Japan, after a delicious buffet breakfast at our hotel, we boarded our tour bus for the U.S. Embassy where we had an excellent introduction to many of the key elements in regard to agriculture, political, and economic affairs as well as the role of the U.S. exports.

Our first speaker of the day was Evan Mangino, Agricultural Attaché, who gave us a wonderful introduction to the role of agriculture in Japan. His main focus was on Japanese agriculture production. We learned a lot about the crossroads that Japanese agriculture is currently experiencing, with the aging population (average age of farmer mid-sixties) and the reluctance of the several generational farms to turnover, leaving a vast majority of land abandoned because they cannot find someone to farm their land. He also addressed the subsidies provided to farmers and the role of Japan Agriculture Cooperatives (JA), which loan equipment to farmers instead of farmers owning the machinery. We could have listened to Evan speak on agriculture all day, but unfortunately his time was limited. He was headed to a ceremony marking 100 years since Japan gave the US Cherry Blossom Trees. They were about to plant a cutting from those trees at a Japanese high school.

Additionally, at the embassy, we heard from Jon Yoo, Political Attaché, and Jenae Johnson, Deputy Financial Attaché, who briefed us on Political and Economic affairs respectively. Jon addressed the stability of the current Japanese administration and high value and confidence the citizens of Japan have in the United States. Jenae addressed the macroeconomics of Japan and the issues their economy is facing. The key factors were that Japan holds the largest national debt per GDP at 240% vs US at 80%, the largest deflationary economy and the highest aging demographics. However, one interesting piece she addressed was that people retire at the age of 65 but live to be an average of 105, and the high popularity of the government provided health care benefits.

After our morning discussion, Agricultural Minister-Counsellor David Miller addressed Japan’s confidence and comfort in the TPP and their interest in how the U.S. progresses with the adaptation of the agreement. We then moved on to hear more about U.S. role in providing exports to Japan and the challenges facing the grains, meat, and soybean markets. Tommy Hamamoto, Director of U.S. Grains Council, Mr. Takemichi Yamashoji, Director of U.S. Soybean Export Council, and Mr. Mitsuyuki Nishimura, Director of U.S. Soybean Export Council each gave key insights to the current U.S. export markets into Japan. Besides learning about logistics, reliability, convenience and competitive concerns, the major take away that we got was the extreme value the Japanese buyer will invest in their product. We learned of the farmers markets and how the producers utilize their images to portrait the pride in their products that they put for sale. This may be an area that the US can learn from the Japanese. They do a great job of connecting the consumer to producer with a photo of the farmer and a story about how the consumer products were produced. Health is also of upmost concern with consumers in Japan. 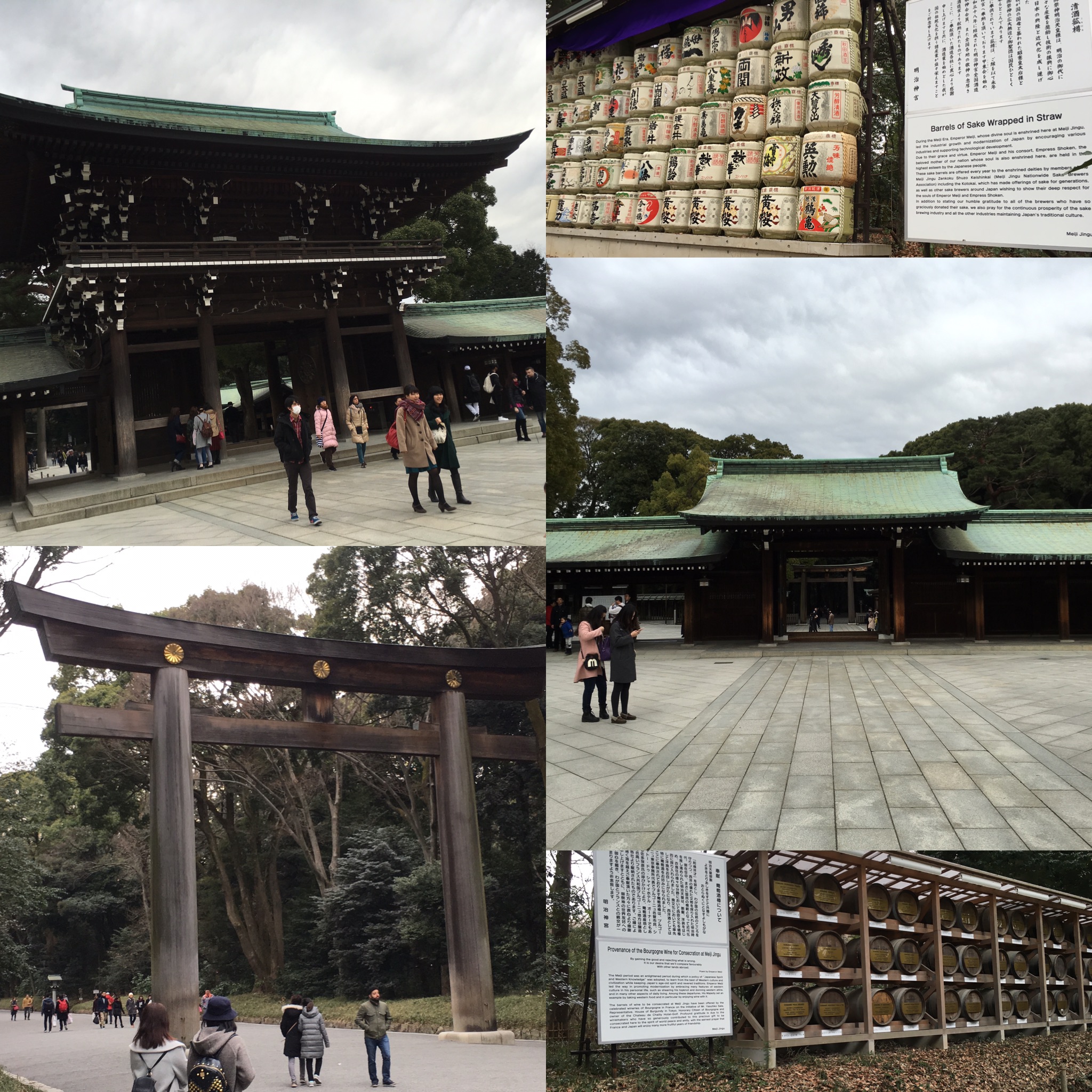 The scenery at the Meiji Jingu Shrine.

That afternoon we got to experience the Meiji Jingu, a Shinto shrine. Shinto is called Japan’s ancient original religion, and it is deeply rooted in the way of Japanese life. Shinto has no founder, no holy book, and not even the concept of religious conversion, but Shinto values – for example, harmony with nature and virtues such as “Magokoro (sincere heart)”. We had the opportunity to walk through the beautiful setting and embrace all the shrine had to offer. Just as the Japanese do at the new year, we made wishes at the shrine for the coming year.

Lastly, we embarked on a boat tour which took us on a true Japanese experience of cuisine, landmarks and entertainment. We were even graced with the Karaoke experience of Don Norton and many others from the class. This was a night we will never forget. Many of our classmates showed us a side we have never seen before. Kanpai! 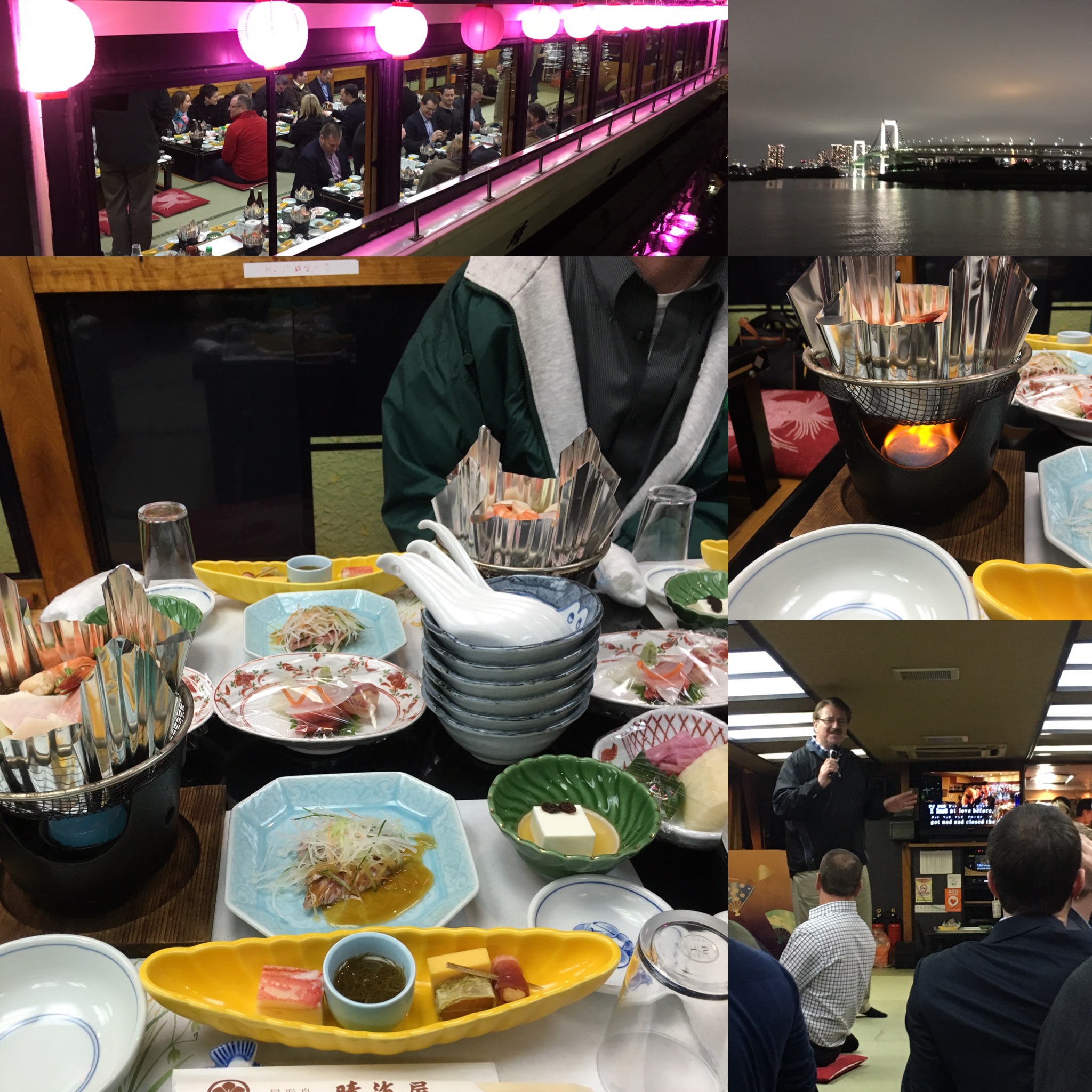 Images from the Yakatabune dinner cruise – complete with many options of Japanese cuisine and karaoke!