The sixth full day of the international seminar offered chances for class members to take in some of the history and culture of Vietnam. The day started with a visit to the War Remnants Museum. The museum offers a narrative on and artifacts from the Vietnam War, or the American War as it is known by the Vietnamese. The museum contains mostly images of the war, and with some homage paid to the many journalists who volunteered to travel to Vietnam to cover the war in an unprecedented way.

Following the stop at the museum, class members had the chance to travel to the Cu Chi tunnels outside of Ho Chi Minh City (Saigon). Built by the Viet Cong over a span of 20 years, the tunnels reached up to 40 feet deep with as many as three different levels. The tunnels housed everything needed for life underground, including kitchens, ventilation channels, munitions storage, infirmary and a weapons forge where they repurposed undetonated U.S. bombs. At its peak, more than 16,000 Viet Cong, including women and children, lived underground.  The tunnel system was a very key part of the Viet Cong’s strategy against the U.S. during the war, and it was an honor to be there and have the chance to see what our troops endured. 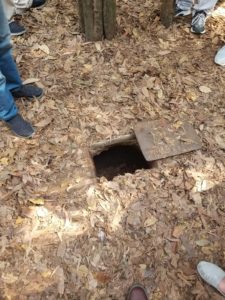 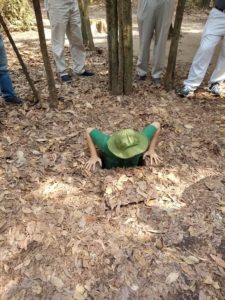 After returning to Ho Chi Minh City, the class departed for dinner where they met with Gerald Smith, Senior Agriculture Attaché based in Vietnam. Mr. Smith has held this post since August 2015, having previously served in India, South Korea and other Southeast Asian countries. From Mr. Smith class members heard a similar story as heard throughout other tours in Vietnam: the growth potential for the Vietnam – U.S. relationship, especially ag exports, feels almost unlimited now. With a young and growing population and a rapidly increasing per capita income, more and more products are in demand here.