Wednesday morning found the class at the American Institute in Taiwan.  We spent a few hours chatting with a panel of experts from a variety of areas including the department defense, the economics council, public diplomacy, the department of commerce and the ag council.  We had access to these top individuals working with the Taiwanese directly on the United States’ behalf,

and it was a privilege to have a chance to ask them questions and learn from their insights. Taiwan and the United States relationship is special and very important to both countries.

After the morning’s AIT introduction, we had representatives from the US Grains council, US Meat Export Federation along with The US Soybean Export Council talk with us about their efforts in promoting imports of grain and meat. Meat exports dominated The conversation with questions regarding pork imports along with growing beef imports to Taiwan.  Chilled beef is one of the fastest growing imports while most of the pork is brought in from Europe.  The goal of the three groups is the promotion of US products in Tawian through education and building relationships with

The class spent the afternoon getting a ‘taste’ of Taiwanese agriculture with a sampling our tropical fruits graciously provided by our hosts at the Council of Agriculture. We discussed the structure of agriculture of the island, the importance of trade and the issues facing the industry with Counselor Dr. Kuei-son Sheu and several high level officials.

The IALP Class of 2018 visiting the Taiwan Council of Agriculture.

The council functions in a similar manner to the USDA implementing policy and regulations for the island’s agriculture sector. Key issues include:

Rice is Taiwan’s most important crop. The island also produces pork, chicken, tea and more than 20 kinds of fruit. The visit laid the foundation for the rest of our time in Taiwan.

We spent the remainder of the afternoon at the Chiang Kai-sek memorial observing the changing of the guard ceremony and learning more about the legacy of the former Chinese leader who became the leader of Taiwan. 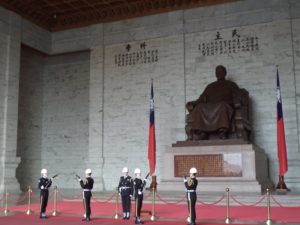 Changing of the guard at the Chiang Kai-sek Memorial.

The class had time in the evening to explore the sights and sounds of Taipei by checking out some night markets, while a few hiked up elephant mountain for a view of the city skyline. 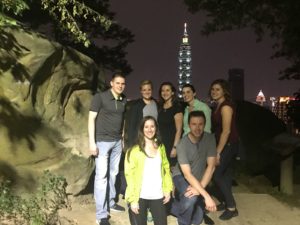 Fellows from the Class of 2018 who hiked up Elephant Mountain. 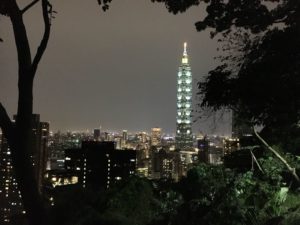