Today was the earliest start of our entire International Study Tour, and the Hilton Panama graciously provided sack breakfasts for us to grab as we left the hotel to board the bus at 6:00am. Our first stop was the Panama Canal Railway for a scenic 47.6 mile ride across Panama to Colón. This railway was the first transcontinental railroad, running its first revenue train on January 28, 1855, connecting North and South America. In 1904, the US took over the railway and moved it to its present location, running parallel to the Panama Canal. Its location made it an integral tool in the construction of the Panama Canal. Currently, the railway is used for both passenger and cargo transport. There are container ports at both ends of the railway, utilized by shipping companies to get containers off Post-Panamax ships from the Atlantic to the Pacific (or vise-versa) and reloaded on another ship, instead of ships traveling extra time around South America. Along the hour-long train ride, we were able to see Panamax ships staged in Gatun Lake for Canal passage, Renacer Prison housing Manuel Noriega, and Panamanian wildlife: monkeys, crocodiles, and native birds. We witnessed 5-6 foot lower water levels due to less than average rainfall the past few years in Panama. These lower water levels are causing a draft restriction which has slowed shipping traffic through the Panama Canal.

We met our bus at the rail station and traveled to Manzanillo International Terminal (MIT) Pier 16 for a briefing and tour, hosted by Rita Wong Lew, of the thriving port transportation business. MIT is located near the Northern entrance to the Panama Canal on what was known as South Coco Solo, a former WWII US Navy seaplane base, and is adjacent to the Colòn Duty Free Zone. MIT started as a Roll On/Roll Off port, expanded into containers in 1995, added a logistics park in the early 2000’s, and is now the second largest port complex in Latin America. The company has 1300 employees, 150 of which have been there since operations began in 1990. MIT has invested $800M to date into the current port, staying on the cutting edge of technology. It is the first port in Latin America to have fully automated cranes with the operators stationed in a remote cabin. This has increased efficiencies so that a truck coming in for a container gets a check-in ticket, is loaded, and back on the road in an average of 30 minutes for the manually operated cranes, or 15 minutes when receiving a container from an automated crane. MIT is transitioning to electric cranes and tugboats (rather than diesel fuel powered engines), which will result in 1467 tons less Carbon Dioxide released into the air. Watching the cranes load container trucks and a visit to the remote control room for the cranes was a highlight of this stop. 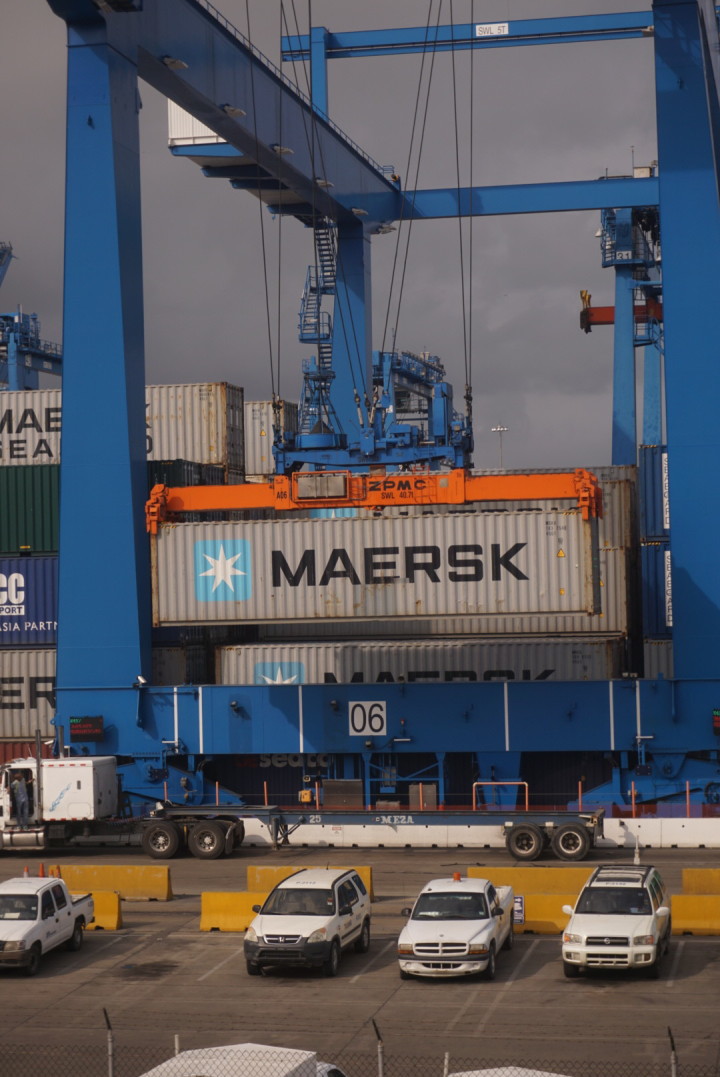 A container is moved at the Manzanillo International Terminal, for continued transit.

Running ahead of schedule, Kenny (our guide for the week) had the bus take us on a driving tour of Colòn.  Colòn has a long standing reputation for drugs and gang issues and deteriorating conditions. The citizens complained and the government started road, bridge, and sidewalk projects on the edge of town, but beyond that, the city has not changed much. We recognized the beauty of the architecture, but the condition of the buildings and the city sanitation was disheartening. Trash in the streets, vacant buildings in disrepair, graffiti, standing storm water, and missing manhole covers/grates were found on nearly every street. This was in stark contrast to the cities we saw in Japan last week. There are no stop signs at any intersection, in either direction, yet we were told they rarely have accidents. Drivers take their turns and it works. This city has great potential in its structures but will take a lot of work to get back to its original glory. 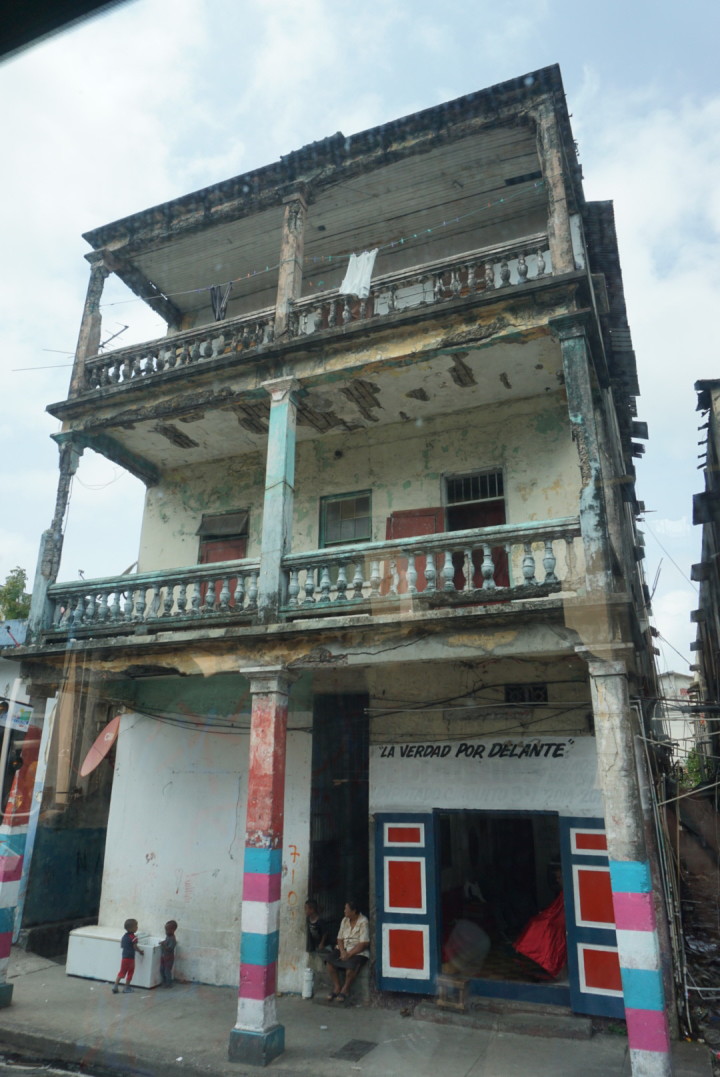 A glimpse at the living conditions in Colon.

The Gatun Locks, Panama Canal Expansion Project was a popular stop. Before visiting the center and observation area we were able to ride in the bus across a set of the lock gates which were closed, making a loop past the holding basins for water needed for lock operations, and back around on the earthen dike separating the locks from Gatun Lake. We took time to watch the short videos about the construction, history, and future for the Gatun Locks. The Gatun Locks will recycle 60% of the water needed for operations, utilizing three adjacent basins. They are starting to flood the locks and have rented three ships for testing, which will happen at the end of April and early May, before the locks go into operation. It will take ships 12 hours to make the passage back and forth each day of testing. The Panama Canal employs 10,000 people and added 8,000 employees to those ranks during construction of the Gatun Locks Expansion. Planning is underway for an expected June Inauguration of the Gatun Locks. 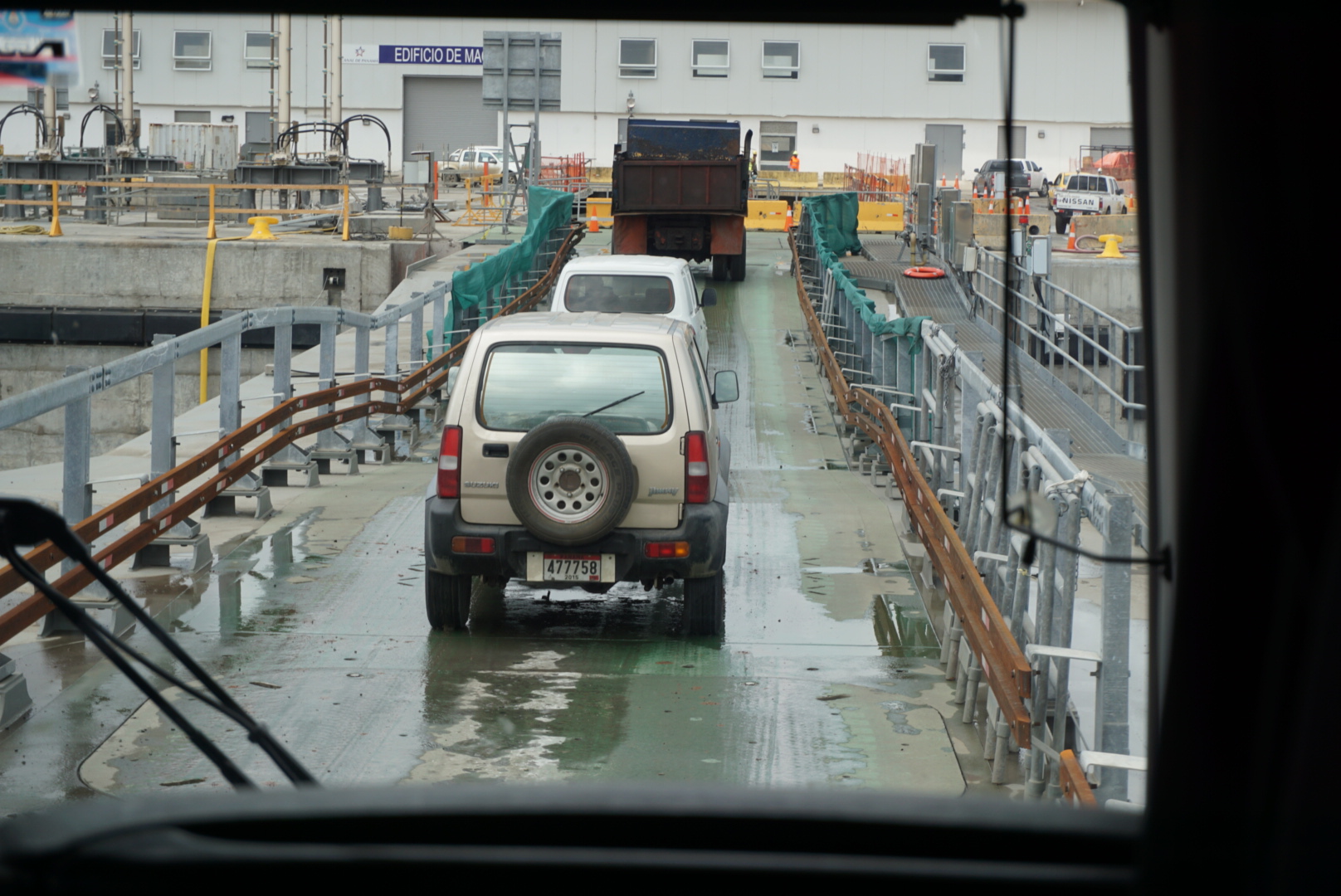 A unique opportunity – driving across the lock expansion project at Gatun, via a closed gate.

A view back of the barrier that separates Gatun Lake from the new locks.

A panoramic view of the new lock expansion project at Gatun Lake.

Onward to a buffet lunch on the former Fort Gulick grounds, in what was once the US Army’s School of the Americas. The drive into Hotel Melia, which hosts the Miraflores Restaurant, gave us a look at how Panama has been able to refurbish and repurpose some of the former buildings and grounds on the Fort, but unfortunately the barracks are abandoned and falling apart. Hotel Melia has done a beautiful restoration of their building. A wide variety of delicious options were available on the buffet and no one went away hungry.

On the way back out to the highway, the bus made a quick stop for a photo op. Our eagle eyed bus driver saw howler monkeys in a tree along the road. After a few photos, we were en route to Panama City for an evening of rest, relaxation and dinner of our own choosing. A majority of the class ended up poolside, sitting around chatting and enjoying each other’s company, graced by a stunning Panamanian sunset, knowing our days together are nearing an end. It was a great way to end another wonderful day in Panama together.