Day four of our Washington D.C. Seminar started off as a bright and uncharacteristically warm day for the first of March and it helped set the tone for another great day of learning opportunities.

Our day started at the World Bank, an organization created at the end of World War II to help rebuild the infrastructure of war-ravaged Europe and Japan. To this day the organization still issues loans to second- and third-world countries to build essential infrastructure. But as the world has changed over the last seven plus decades so too has the work of the World Bank. Today the organization’s goals are two-fold: end extreme poverty and boost the shared income of the global population, effectively creating a bigger global middle class. What better place to start than with agriculture?

Food insecurity – hunger – is the world’s largest cause of death. And the single largest cause of food insecurity is poverty. Often in agriculture we talk about the need to produce more with less for the world’s expanding population. And while this increase in production is certainly important, we must also ensure that all members of the population have access to and the purchasing power for a safe, nutritional and affordable supply of food. Putting this all together in the view of the World Bank, reducing poverty will have a direct tie to ending extreme poverty.

Mark Cackler, Manager of Agriculture and Food Security at the World Bank shared with us that growth in the agriculture industry has 2- to- 4 times more impact on income and poverty than any other sector. Investment in global agriculture is crucial for meeting the demands of a growing population.

Sean Arians (far right) asks a question of Mark Cackler (center), Manager of Agriculture and Food Security at The World Bank. Mr. Cackler also happens to be a native of Illinois – from Moline.

Our second stop of the day created another opportunity for discussion on global agriculture. We were warmly welcomed at the Embassy of Luxembourg and had the honor of meeting with Luxembourg’s Ambassador to the U.S., Her Excellency Sylvie Lucas. After Ms. Lucas provided a brief overview of her small country in Western Europe, specifically its economy, we had the opportunity to dive into a conversation around agriculture. Luxembourg played an integral role in the founding of the European Union and as such, remains firmly committed to European integration today, including the EU’s ag policies. 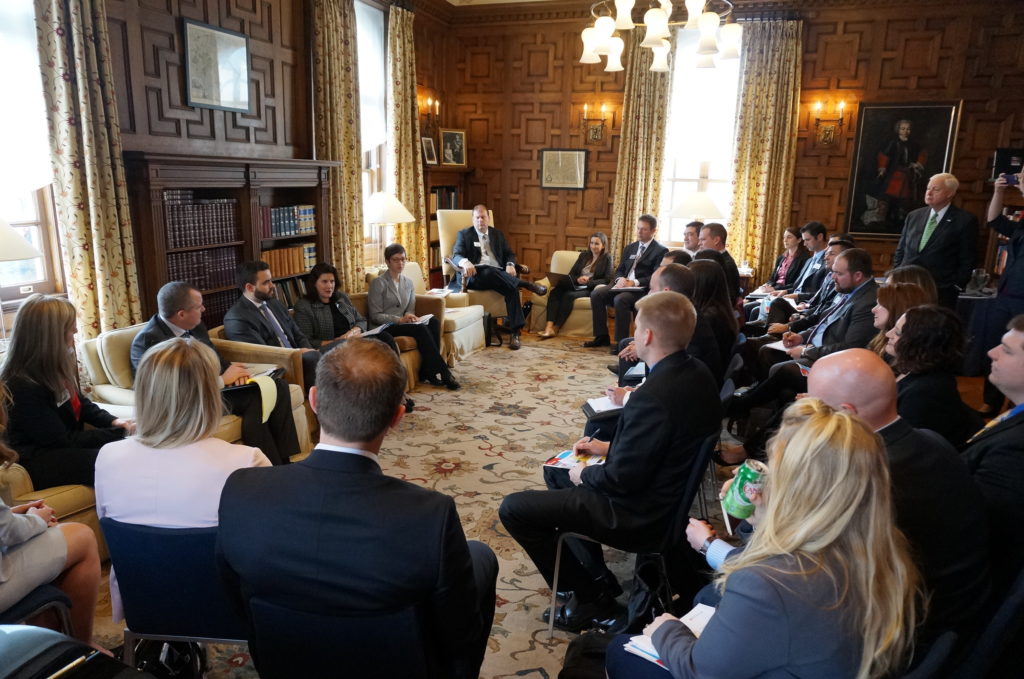 The Class of 2018 is warmly welcomed to the Embassy of Luxembourg by Her Excellency, Ambassador Sylvie Lucas.

The EU is not known for its friendly views towards conventional U.S. agriculture. Local, organic and sustainable were just a few of the words we heard multiple times in our visit with the embassy. Yield or production capacity is not particularly of concern. And especially in Luxembourg’s case, a country with a high per capita income, food insecurity is not an issue and people are willing to pay more for what they believe is a better product. While we may not have impacted any policies of Luxembourg or the EU in our short time at the embassy, we did learn – and that will make us an even better advocate for agriculture in the future.

Our last stop of the day took us to a place no former IALP group has ever had the chance to visit – the Embassy of Cuba. The U.S. reestablished diplomatic relations with our island neighbor in July 2015 and the embassy fully reopened at that time. Our class met with Rueben Ramos Arrieta, Minister Counselor, Economic and Trade Office and Mr. Arrieta made clear his country stands ready for an even stronger trade relationship between the U.S. and Cuba, especially with respect to agriculture. The country currently imports agricultural products from all over the world, many of which are also produced in the U.S. For example, Cuba imports approximately 500,000 tons of rice each year, primarily from Vietnam. The main growing rice region of the U.S. is only a short distance up the Mississippi River.

Minister Counselor for Economics Ruben Ramos Arrieta speaks to the class in the Embassy of Cuba.

Mr. Arrieta cited a number of policies that prevent greater trade between the two countries, the most important one being a lack of credit given to Cuba by the U.S. – any U.S. goods must be paid for in full before they can be shipped to Cuba. With trade being such a dominant focal point of the current administration only time will tell what our relationships with Cuba, and many other countries, looks like in the coming years.

We capped off day four with a reception at the American Farm Bureau Federation office and the unique opportunity to mingle with members of three other ag leadership groups from the states of Indiana, Minnesota and Washington. We used the opportunity to learn about agriculture in other parts of the country and compare our respective leadership journeys.

Julie Tesch, Executive Director of the American Farm Bureau Foundation for Agriculture speaks to a room full of participants from the Washington, Minnesota, Indiana, and Illinois Ag Leadership Programs.

It was another busy but fulfilling day in country’s capital.